PARAMUS, N.J. -- Loud piped-in music, cramped grocery aisles, high prices for organics, and a food court that would save you only a few bucks over a full-service Korean restaurant.

Those are among my impressions after a first visit to a new H Mart that had its long-delayed grand opening on April 27 in a shopping center at Routes 17 and 4.

The 25,000-square-foot Korean supermarket would have been the seventh in Bergen County opened by the Lyndhurst-based chain, but H Mart closed its Englewood supermarket unexpectedly on April 23.

In a notice on the parking lot gates, customers were told the Englewood store had "relocated" to Paramus.

The Paramus H Mart is not especially large, as you'll see if you try pushing a standard grocery cart down the narrow aisle with overpriced pasta sauces.

H Marts are known for their great produce, but I didn't see any organic Asian greens, and the organic salad mixes I did see were overpriced compared to Costco Wholesale.

The store was charging $5.99 for a pound of Earthbound Farm Organic Spring Mix, compared to $4.79 at Costco.


I also saw shelves labeled "ORGANIC" that were stocked with both organic and non-organic produce.

A highlight of the store is the seafood section, where I was surprised and delighted to find fresh, wild-caught red mullet ($5.99 a pound), a small fish  found near the South American coast and in the Mediterranean.

Among the free samples on Sunday were tiny portions of lobster salad and seared ahi tuna in a sesame dressing.

I'll likely return to shopping at the much bigger Little Ferry H Mart on Bergen Turnpike, near Route 46 -- shabbiest of the chain's Bergen County stores -- and wait for the grand opening of another new H Mart under construction and months behind schedule next door. 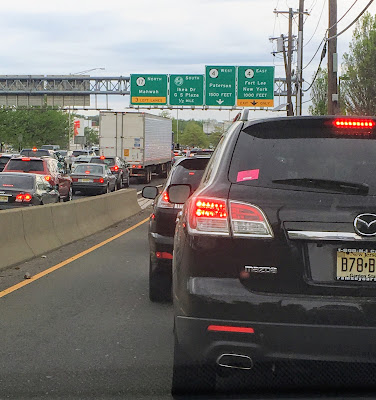