I'm waiting for who will tell Trump to his face: Stop lying to the American people 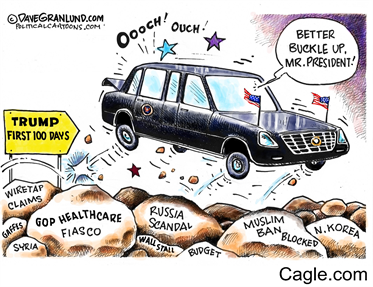 PLUS: THE RECORD'S HALF-ASSED JOB COVERING ELECTIONS IN HACKENSACK

I doubt the first reporter to confront President Trump on all of the lies he's been telling will come from the demoralized White House press corps.

And The Record of Woodland Park has recently stopped running Page 1 stories about the president's Tweets and public statements, nearly of all of which are filled with falsehoods, exaggerations and distortions.

On April 4, The Washington Post's Fact Checker took a look at "President Trump's six flip-flops in less than 24 hours."

Thanks to the news media, Candidate Trump got away with every lie, "alternative fact" and "truthful hyperbole" during the 2016 campaign, allowing him to win the White House on a technicality.

Since he was sworn in as president nearly 100 days ago, little has changed.

Our illegitimate president continues to exaggerate his showing in the Electoral College, while ignoring his loss of around 3 million popular votes.

See Addicting Info, a website that was started to "discredit all the lies and propaganda that the right- wing spreads."

It's only a week until the school election in Hackensack, but The Record still hasn't reported on any of the issues involved or given details of the $109 million Board of Education budget.

Next Tuesday, voters have the opportunity to vote "yes" or "no" on the $81.2 million tax levy, plus choose among four candidates vying for three seats on the school board.

So far, Staff Writer Rodrigo Torrejon, who covers Hackensack, hasn't said a word about what the candidates stand for.

If past elections are any guide, fewer than 1,500 of the city's 20,000 registered voters will cast ballots, and the budget will be approved.

Today, on the Local news front, Torrejon reports three slates competing for 5 seats on the Hackensack City Council will present "their platforms and field questions at a private event at an apartment building on Prospect Avenue" (1L).

That will be similar to a campaign forum held in 2013, when Mayor John Labrosse and his slate of reformers were elected.

But The Record hasn't reported on the platforms of the slates in the May 9 municipal election, when the Labrosse Team is seeking re-election.

Page 1 today carries two major stories from Paterson, which is covered in far more detail than any of the 70 communities in Bergen County, where the majority of readers live.

The lead story on the corruption charges against Paterson Mayor Joey Torres reports three co-defendants are being offered deals in return for their testimony against him (1A).

That's the way it's been done since time immemorial.

Let's hope starting tomorrow, Editor Richard Green and Paterson Press writer Joe Malinconico spare Bergen readers every single burp, cough and fart in the case against Torres in the year or two before he most certainly will be convicted.

The second Paterson story on Page 1 -- reporting Syrian refugees shared their experiences with fellow students at John F. Kennedy High School in Paterson -- was already the subject of an editorial that ran in Sunday's paper.

There's no explanation why the news story is running after the editorial instead of in the usual order -- news story first, commentary second.

Monday's front page was dominated by two stories that could have been written anytime in the last five years -- a so-called apartment building boom and the "out-of-towners" who buy drugs in Paterson.

Huh? If I follow that reasoning, I'm a first-generation resident of Aleppo, Syria, where my parents were born. (I was actually born in Brooklyn, N.Y.)

Then, my friend Aaron would be a first-generation survivor of the Battle of the Bulge in World War II.

You get the idea. It's a ridiculous assertion to make for Ben-Ari or anyone else.

The Record continues embargo on Zisas